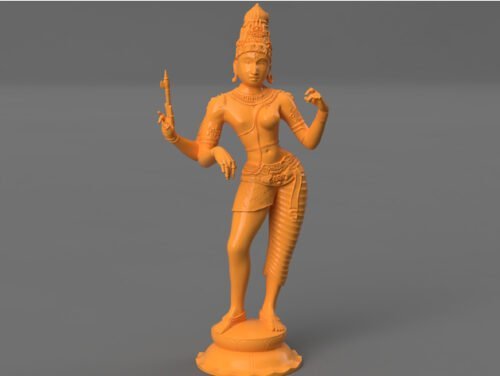 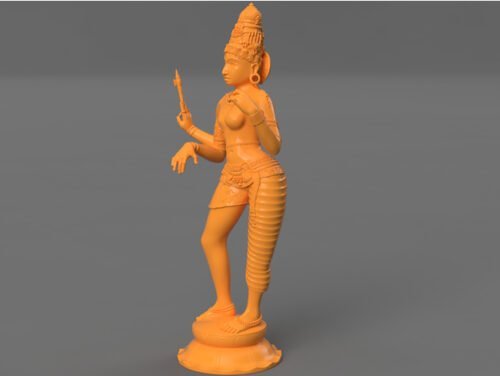 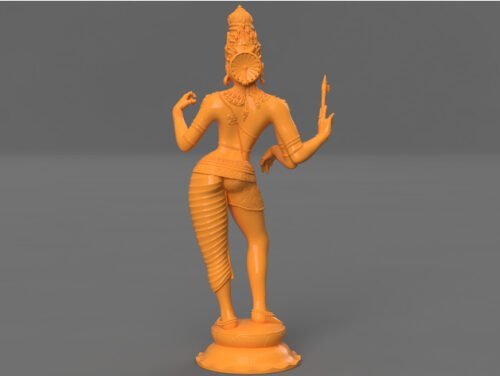 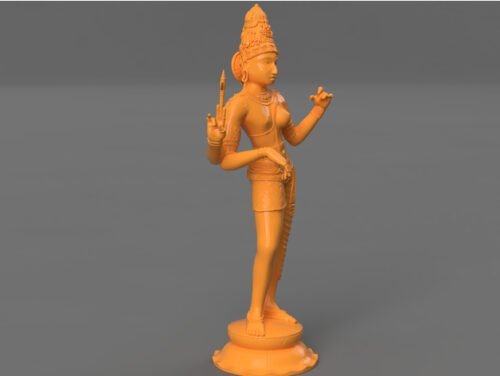 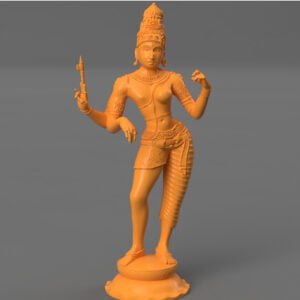 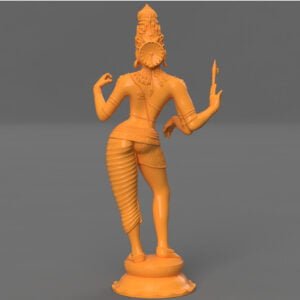 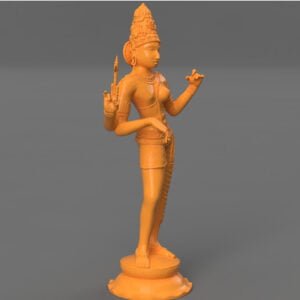 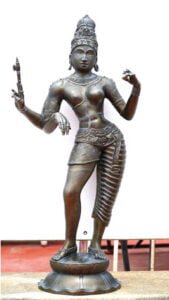 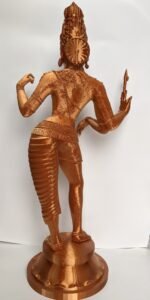 Ardhanarishvara – “the Lord Who is half woman.” About the Original Sculpture:
Ardhanarishvara
Tiruvenkadu, Thanjavur District. Height 101 cm. Around the 11th Century AD.
The name Ardhanarishvara means “the Lord Who is half woman.” Siva is represented here as half-male and half-female, typifying the male and female energies. The right half represents Siva and the left Parvati. Siva has a jatamakuta with a crescent moon. He has three arms of which the lower armrests on the back of the bull, his vehicle., and the upper right has an axe. The whole of the right side is adorned with ornaments peculiar to Shiva. The right leg is bent and rests on the pedestal. The drapery is shown up to the knee. On the left side, the image has Karanda makuta. The drapery is up to the anklets and her leg is slightly bent, resting on the pedestal.

The male half wears a jata-mukuta (a headdress formed of piled, matted hair) on his head, adorned with a crescent moon. Sometimes the jata-mukuta is adorned with serpents and the river goddess Ganga flowing through the hair. The right ear wears a nakra-kundala, sarpa-kundala (“serpent-earring”) or ordinary kundala (“earring”). Sometimes, the male eye is depicted as smaller than the female one and a half-moustache is also seen. A half third eye (trinetra) is prescribed on the male side of the forehead in the canons; a full eye may also be depicted in the middle of the forehead separated by both the sides or a half-eye may be shown above or below Parvati’s round dot. A common elliptical halo (prabhamandala/prabhavali) may be depicted behind the head; sometimes the shape of the halo may differ on either side.

The female half has karanda-mukuta (a basket-shaped crown) on her head or well-combed knotted hair or both. The left ear wears a valika-kundala (a type of earring). A tilaka or Bindu (a round red dot) adorns her forehead, matching Shiva’s third eye. The left eye is painted with black eyeliner. While the male neck is sometimes adorned with a jeweled hooded serpent, the female neck has a blue lotus matching it. Parvati has a well-developed, round bosom and a narrow feminine waist embellished with various haras (religious bracelets) and other ornaments, made of diamonds and other gems. She has a fuller thigh and a curvier body and hip than the male part of the icon. The torso, hip, and pelvis of the female are exaggerated to emphasize the anatomical differences between the halves.

Ardhanarishvara is one of the most popular iconographic forms of Shiva. It is found in more or less all temples and shrines dedicated to Shiva all over India and Southeast Asia. The concept of Ardhanarishvara originated in Kushan and Greek cultures simultaneously; the iconography evolved in the Kushan era (30–375 CE) but was perfected in the Gupta era (320-600 CE).

Be the first to review “Ardhanarishvara – “the Lord Who is half woman.”” Cancel reply