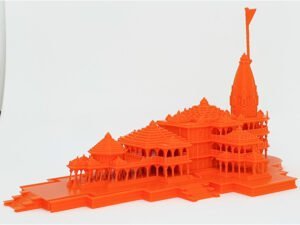 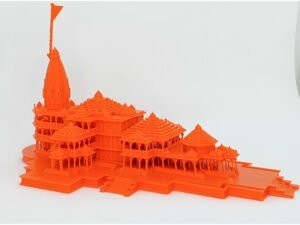 Architecture:
A new design was prepared by the Sompura family in 2020, in accordance with traditional Hindu architectural principles and sciences. The Sompuras have been part of the temple design of over 100 temples all over the world for at least 15 generations.
The temple will be 235 feet wide, 360 feet long, and 161 feet high. Once complete, the temple complex will be the world’s third-largest Hindu shrine. It is designed in the Nagara style of Indian temple architecture. The building will have a total of 366 columns. The columns will have 16 idols each to include the incarnations of Shiva, the 10 Avatars of Vishnu, and the 12 incarnations of the goddess Saraswati. The width of the stairs will be 16 feet. In accordance with scriptures dedicated to the design of temples dedicated to Vishnu, the sanctum sanctorum will be octagonal.

What is it:
One of the most important Hindu temples to be ever built in the history of India. As of 2021, this is an under-construction temple in the city of Ayodhya, at the site believed to be the birthplace of Hindu god Ram.

Why is being built now?
Rama or Ram, considered an incarnation of God Vishnu, is a widely worshiped Hindu deity. He was believed to have been born in Ayodhya in around 5114 BC.
In the 16th century, the Mughals constructed a mosque at the site believed to be the birthplace of Ram. The mosque was demolished by a crowd of 150,000 on Dec 6th, 1992. A 1978 and 2003 archaeological excavation by the Archaeological Survey of India (ASI) found evidence indicating that Hindu temple remains had existed on the site. In 2019 the Supreme Court of India ruled that the land be handed over to the Indian Government for the construction of a Ram Temple.

Funding:
The entire temple complex is being crowdfunded. The donations have already exceeded 10x the estimate of the project.