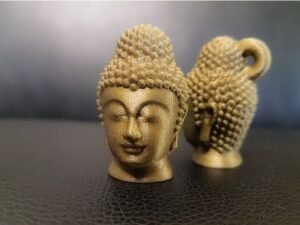 This is a statue depicting Gautama Buddha, an ascetic (śramaṇa) and sage, on whose teachings Buddhism was founded. He is believed to have lived and taught mostly in the eastern part of ancient India sometime between the 6th and 4th centuries BCE

The Buddha can be recognized by several marks, most prominently the ushnisha, a protrusion on the head that in this sculpture appears as a bun hairstyle, and the urna, a tuft of hair between his eyes from which he emits a ray of light that reveals the whole universe. On the pedestal, a meditating Buddha is flanked by Brahma and Indra, two Hindu gods who were incorporated into the Buddhist pantheon as guardian deities. This sculpture is from Gandhara, a historical region in present-day northwest Pakistan and eastern Afghanistan. Gandharan art has close affinities with ancient Greek and Roman art, evidenced by the flowing folds of robes and chiseled facial features. Greek troops occupied the area in 330 BCE, and Indian, Persian, and central Asian forces also established a presence there between 300 BCE and 460 CE. Trade provided the ultimate incentive for all travelers, as Gandhara occupied a central location along the caravan routes that connected China to lands farther west.

Be the first to review “Buddha Head Keychain” Cancel reply