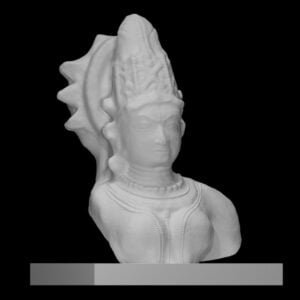 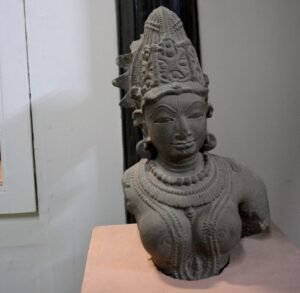 This is a bust statue depicting Lakshmi or Laxmi, the Hindu goddess of wealth, fortune, and prosperity. She is the wife and shakti (energy) of Vishnu, one of the principal deities of Hinduism and the Supreme Being in the Vaishnavism Tradition. With Parvati and Saraswati, she forms Tridevi, the holy trinity. Lakshmi is also an important deity in Jainism and found in Jain temples. Lakshmi has also been a goddess of abundance and fortune for Buddhists and was represented on the oldest surviving stupas and cave temples of Buddhism. In Buddhist sects of Tibet, Nepal, and Southeast Asia, goddess Vasudhara mirrors the characteristics and attributes of the Hindu goddess Lakshmi with minor iconographic differences. Many people have names that mean goddess Lakshmi, like Nandika, Aarna, Padmavati, and Shreya

Lakshmi is also called Sri or Thirumagal because she is endowed with six auspicious and divine qualities, or gunas, and is the divine strength of Vishnu. In the Hindu religion, she was born from the churning of the primordial ocean (Samudra Manthan) and she chose Vishnu as her eternal consort. When Vishnu descended on the Earth as the avatars Rama and Krishna, Lakshmi descended as his respective consort. In the ancient scriptures of India, all women are declared to be embodiments of Lakshmi. The marriage and relationship between Lakshmi and Vishnu as wife and husband is the paradigm for rituals and ceremonies for the bride and groom in Hindu weddings. Lakshmi is considered another aspect of the same supreme goddess principle in the Shaktism tradition of Hinduism.

Lakshmi is depicted in Indian art as an elegantly dressed, prosperity-showering golden-colored woman with an owl as her vehicle, signifying the importance of economic activity in the maintenance of life, her ability to move, work and prevail in confusing darkness. She typically stands or sits like a yogin on a lotus pedestal and holds a lotus in her hand, a symbolism for fortune, self-knowledge, and spiritual liberation. Her iconography shows her with four hands, which represent the four goals of human life considered important to the Hindu way of life: dharma, kāma, artha, and moksha. She is often depicted as part of the Trinity (Tridevi) consisting of Saraswati, Lakshmi, and Parvati.

Archaeological discoveries and ancient coins suggest the recognition and reverence for Lakshmi by the 1st millennium BCE. Lakshmi’s iconography and statues have also been found in Hindu temples throughout Southeast Asia, estimated to be from the second half of the 1st millennium CE. The festivals of Diwali and Sharad Purnima (Kojagiri Purnima) are celebrated in her honor.

The Replica is created using the 3d printing technology with high precision and quality takes 16 hours to make using Resin, PLA Bioplastic. The Sculpture comes in multiple color options you can choose between and the size of the sculpture is given below.

Be the first to review “Lakshmi” Cancel reply